Secret Of Fatima: Will There Be A Taliban Muslim Terror Attack During Cardinal Burke's Funeral Mass Causing The Big City Half In Ruins? bagram Concerns over US terror threats rising as Taliban hold grows
WASHINGTON (AP) — America’s top general said Sunday that the United States could now face a rise in terrorist threats from a Taliban-run Afghanistan. That warning comes as intelligence agencies charged with anticipating those threats face new questions after the U.S.-backed Afghan military collapsed with shocking speed. Less than a week after a military assessment predicted Kabul could be surrounded by insurgents in 30 days, the world on Sunday watched stunning scenes of Taliban fighters standing in the Afghan president’s office and crowds of Afghans and foreigners frantically trying to board planes to escape the country. Gen. Mark Milley, the chairman of the Joint Chiefs of Staff, told senators on a briefing call Sunday that U.S. officials are expected to alter their earlier assessments about the pace of terrorist groups reconstituting in Afghanistan, a person familiar with the matter told The Associated Press. Source 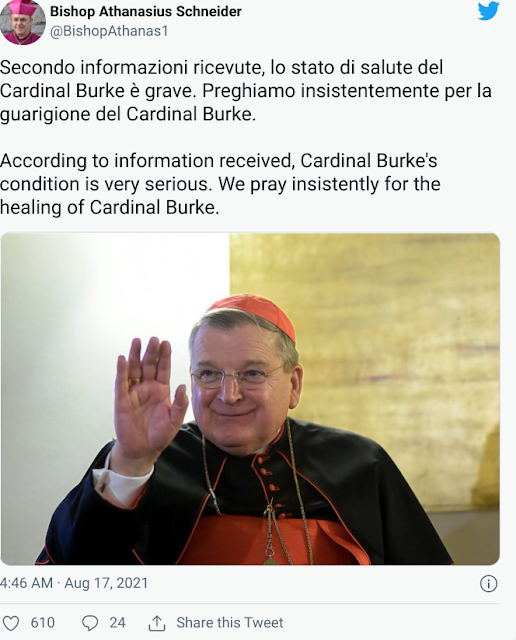 “J.M.J.
The third part of the secret revealed at the Cova da Iria-Fatima, on 13 July 1917.
I write in obedience to you, my God, who command me to do so through his Excellency the Bishop of Leiria and through your Most Holy Mother and mine. After the two parts which I have already explained, at the left of Our Lady and a little above, we saw an Angel with a flaming sword in his left hand; flashing, it gave out flames that looked as though they would set the world on fire; but they died out in contact with the splendour that Our Lady radiated towards him from her right hand: pointing to the earth with his right hand, the Angel cried out in a loud voice: ‘Penance, Penance, Penance!'. And we saw in an immense light that is God: ‘something similar to how people appear in a mirror when they pass in front of it' a Bishop dressed in White ‘we had the impression that it was the Holy Father'. Other Bishops, Priests, men and women Religious going up a steep mountain, at the top of which there was a big Cross of rough-hewn trunks as of a cork-tree with the bark; before reaching there the Holy Father passed through a big city half in ruins and half trembling with halting step, afflicted with pain and sorrow, he prayed for the souls of the corpses he met on his way; having reached the top of the mountain, on his knees at the foot of the big Cross he was killed by a group of soldiers who fired bullets and arrows at him, and in the same way there died one after another the other Bishops, Priests, men and women Religious, and various lay people of different ranks and positions. Beneath the two arms of the Cross there were two Angels each with a crystal aspersorium in his hand, in which they gathered up the blood of the Martyrs and with it sprinkled the souls that were making their way to God.
Tuy-3-1-1944”.