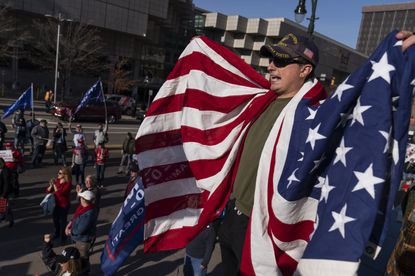 Stop The Steal Rally At Cobo Hall, Detroit
NOVEMBER 2020
Michael Joseph Foy was at Stop the Steal Rally in Michigan in November 2020. So was Christine Niles and Michael Voris of Church Militant. Was the Hockey Stick Man influenced or radicalized by Niles and Voris?
Well Voris and Niles do admit that they like to influence others to their way of thinking.
So yes I think that Niles and Voris played a part in the actions of Hockey Stick Man .
Metro Detroit man charged in assault of police officer with hockey stick during Capitol Riot
WESTLAND, Mich. - A Michigan man seen beating a police officer with a hockey stick during the riots at the U.S. Capitol has been charged with several crimes. Michael Joseph Foy was identified by the FBI through news tips and footage collected by several media outlets, where footage shows him swinging a hockey stick at a police officer on the ground. He's been charged with several felonies, including obstruction of law enforcement, forcibly assault, resist, oppose, impede, intimidate, or interfere with any officer of the United States, aiding and abetting, and the obstruction of an official proceeding of Congress. Foy, 29, is currently a resident of Wixom. Source
Michael Joseph Foy was radicalized by Christine Niles and Voris of Church Militant.com located in Ferndale Michigan - about 30 minutes from where Foy lives in Wixom, MI.
Church Militant:
Trump Supporters Rally, Pray
A number of Stop the Steal rallies were held at state capitols across the nation Saturday, including large ones in Phoenix, Arizona; Harrisburg, Pennsylvania; Atlanta, Georgia and Lansing, Michigan, among others. Trump supporters continue to gather peacefully outside Maricopa County Election Headquarters in Arizona as well as Cobo Hall in Detroit insisting on transparency during the counting process.While Christians around the nation continue to pray that voter fraud and Democrat interference in the election be exposed, Catholics specifically are urging that Americans pray the Rosary and offer various novenas to spare our nation. Church Militant is offering a Novena for Our Nation beginning at 8 a.m. ET Monday, Nov. 9. It is a "special appeal to Our Lord and Our Lady, and particularly the Holy Spirit, to help President Trump and the nation through the embattled post-election season." The novena, followed by Rosary and Morning Prayer, will be livestreamed from the homepage daily. Source


Thanks to @Catholic_Hack for welcoming me back onto his show this morning. A clip below.