Pope Francis Receives The Russian President In The Vatican 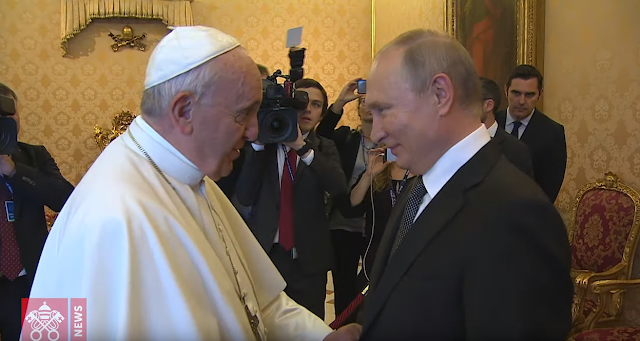 Thursday's audience is President Putin's sixth visit to the Vatican, his third with Pope Francis

Pope Francis on Thursday received Vladimir Putin in an audience at the Vatican. It's the Russian president's sixth visit to the Vatican, and his third audience with Pope Francis.

Following the meeting which lasted about one hour, a communiqué released by the Holy See Press Office said the Pope received the President of the Russian Federation in the Apostolic Palace, and that President Putin subsequently met with the Vatican Secretary of State, Cardinal Pietro Parolin, and with the Secretary for Relations with States, Archbishop Paul Richard Gallagher.

The communiqué continued saying that “During the cordial discussions, both Parties expressed their satisfaction at the development of bilateral relations, further strengthened by the protocol of understanding signed today regarding the collaboration between the “Bambino Gesù” Paediatric Hospital and the paediatric hospitals of the Russian Federation”.

Vatican and Russian children’s hospitals join forces Other issues discussed included questions of relevance to the life of the Catholic Church in Russia.

Pope Francis and President Putin also went on to consider the ecological question and various themes relating to current international affairs, with particular reference to Syria, Ukraine and Venezuela.

The two men met for the first time in 2013, shortly after Pope Francis' election to the papacy; and then in 2015. The urgent need to pursue peace in the Middle East, and especially in Syria, likewise featured prominently in earlier conversations. The conflict in Ukraine was also a focus of the meeting in 2015.

President Putin has also met with Pope Francis’ predecessors in the See of Peter. His first audience with a Pope came in the Jubilee Year 2000, when he met with Pope Saint John Paul II. At the time, President Putin noted the importance of the mission of the Holy See in the process of integration between East and West. Three years later, the two leaders met again to discuss a number of issues, including the situation of Catholics in Russia, and the ecumenical dialogue between the Holy See and the Orthodox Patriarchate of Moscow. New initiatives for peace in the Holy Land and in Iraq were also part of the discussion.

Benedict XVI received President Putin in 2007, the only meeting between the two. Their conversation revolved around themes of common interest to the Church and the Russian Federation, with particular attention to the problems of extremism and intolerance.

Relations between Russia and the Holy See saw a turning point in December 1989, toward the end of the Soviet era, when Mikhail Gorbachev met with St John Paul II. It was the first meeting of a Pope with a Soviet leader. Diplomatic relations between the Vatican and the Soviet Union were established following the encounter. Source