16:15 Transfer to the Day Centre of the Capuchin Fathers
16:30 PRIVATE VISIT to the DAY CENTRE FOR HOMELESS FAMILIES of the CAPUCHIN FATHERS
19:30 Arrival at Croke Park Stadium
19:45 FESTIVAL OF FAMILIES in Croke Park Stadium - Speech of the Holy Father 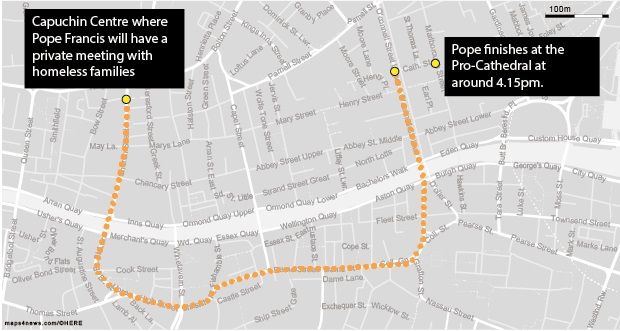 POPE FRANCIS WILL make his way through Dublin city centre during his visit for the World Meeting of Families, gardaí have confirmed.  Assistant commissioner Pat Leahy told Today with Miriam on RTÉ Radio 1 this morning that the pontiff will travel up O’Connell Street, Westmoreland Street and Dame Street at around 4.15pm on Saturday afternoon, prior to his speech at Croke Park later that evening.  Speaking about the work gardaí have put in to prepare for the two-day visit from the Pope, Leahy said: “We’re ready to go, the planning that has gone into this is enormous.”  Source