Our Lady Of La Salette On Why Paris Will Burn: Video From Paris: Muslim Migrants Storm Basilica Of Saint-Denis Force Cancellation Of Evening Mass

“Paris will burn and Marseilles will be engulfed. Our Lady of La Salette 19 Sept. 1846 (Published by Mélanie 1879)

“France, Italy, Spain, and England will be at war. Blood will flow in the streets. Frenchman will fight Frenchman, Italian will fight Italian. A general war will follow which will be appalling. For a time, God will cease to remember France and Italy because the Gospel of Jesus Christ has been forgotten. The wicked will make use of all their evil ways. Men will kill each other; massacre each other even in their homes. Our Lady of La Salette 19 Sept. 1846 (Published by Mélanie 1879)

“Italy will be punished for her ambition in wanting to shake off the yoke of the Lord of Lords. And so she will be left to fight a war; blood will flow on all sides. Churches will be locked up or desecrated. Priests and religious orders will be hunted down, and made to die a cruel death. Several will abandon the faith, and a great number of priests and members of religious orders will break away from the true religion; among these people there will even be bishops.  Our Lady of La Salette 19 Sept. 1846 (Published by Mélanie 1879) 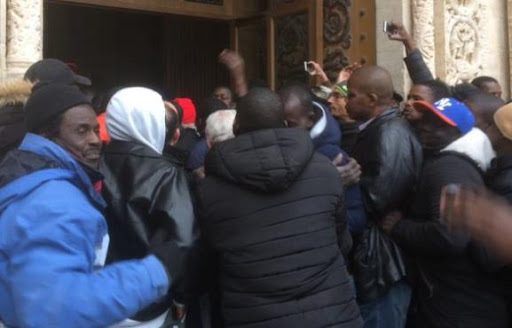 The Paris fire should cancel Mass as well....only more so....

Muslim migrants invade the Basilica of Saint-Denis, which is in a heavily Muslim area of France. By the end of the video, police line the doorway to the church, preventing the Muslim migrants from entering. This is a glimpse into the future of France. Before too long, anytime a church service is going on, there will have to be a squadron of police lining the entrances.  Source