“In the year 1864, Lucifer together with a large number of demons will be unloosed from hell Our Lady of La Salette 19 Sept. 1846 (Published by Mélanie 1879)

"Our wrestling is not against flesh and blood; but against Principalities and Powers, against the rulers of the world of this darkness, against the spirits of wickedness in the high places."
Ephesians 6:12

Is there a correlation between the increased demonic possessions and increased air passenger  traffic?

Back in the day airlines never flew above 20,000 feet and demonic possession was low.

On both points modern man would soon ignore and laugh at.

The punishment for flying 24/7 above 15 cubits above the mountain tops?

Laugh all you want....for now....until it hits close to home


Vatican to hold exorcist training course after 'rise in possessions'

The Vatican is to hold a training course for priests in exorcism next month amid claims that demands for deliverance from demonic possession have greatly increased across the the world.  The Vatican-backed International Association of Exorcists, which represents more than 200 Catholic, Anglican and Orthodox priests, said the increase represented a “pastoral emergency”.  According to a priest from Sicily, the number of people in Italy claiming to be possessed had tripled to 500,000 a year, and an Irish priest has said demand for exorcisms has “risen exponentially”.  Last year, the Christian thinktank Theos reported that exorcisms were a “booming industry” in the UK, particularly among Pentecostal churches.  But some warn that “deliverance ministry” can be a form of spiritual abuse. Critics also say LGBT people and those with mental health issues are targeted for deliverance in the belief that their sexuality or psychiatric problems are the result of demonic possession. Source

So is there a correlation?

I would say yes.

I could not find a chart that shows increased Demonic activity, but here is a chart that is similar. As you should know UFO are nothing by demons taking on a form that they are allowed to take on by the Blessed Trinity.

Notice the increase in UFO sightings and increased Atheism:

But I'm the only one in the world who says so.

No one is willing to forgo flying from one place to another. At least not yet.

Things should get worse.

Two reasons found in the Summa of St. Thomas Aquinas why man is not allow above 29,050ft boundary:

1. Question 74. The fire of the final conflagration

2. Question 64. The punishment of the demons 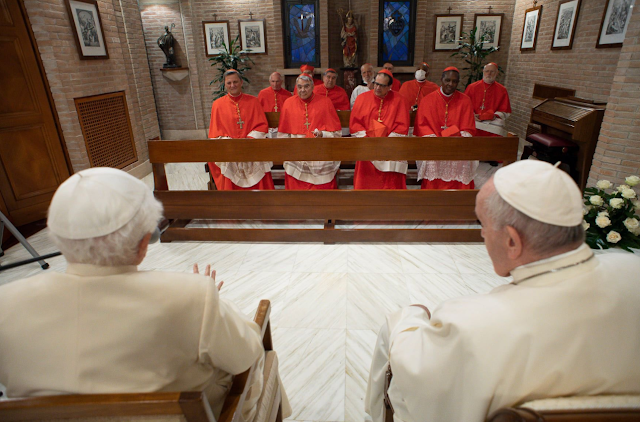 Good Morning Everybody! We Have 13 New Cardinals And We Still Have Two Popes ~ Signed Mélanie

The Pope and the new Cardinals visit Benedict XVI  Pope Emeritus, Benedict XVI, greeted and blessed the 13 new Cardinals whom he met in the chapel of the “Mater Ecclesiae” monastery in the Vatican after the consistory. Following the celebration of Saturday afternoon’s Ordinary Public Consistory, which took place in St. Peter's Basilica, "the Holy Father and the 11 new cardinals present in Rome visited Pope Emeritus, Benedict XVI.” According to a statement released by the Holy See Press Office, the meeting took place in the chapel of the Mater Ecclesiae monastery inside the Vatican "in an atmosphere of affection”, during which the cardinals were introduced individually to the Pope Emeritus. The statement also said that Benedict XVI expressed his joy for the visit and, after the recitation of the “Salve Regina” blessed them. In keeping with tradition The visit to the Mater Ecclesiae monastery in the Vatican has become a consolidated tradition since the Consistory of 20 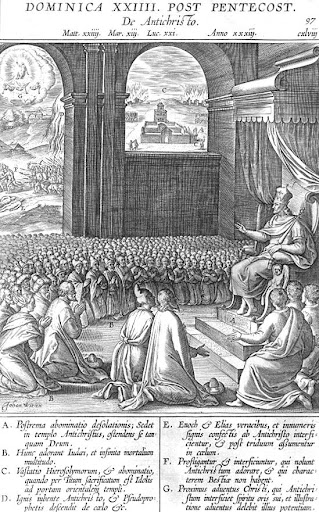 GOSPEL Matt. 24:15-35   At that time, Jesus said to His disciples: "When therefore you shall see the abomination of desolation, which was spoken of by Daniel the prophet, standing in the holy place: he that readeth let him understand. Then they that are in Judea, let them flee to the mountains: And he that is on the housetop, let him not come down to take any thing out of his house: And he that is in the field, let him not go back to take his coat. And woe to them that are with child and that give suck in those days. But pray that your flight be not in the winter or on the sabbath. For there shall be then great tribulation, such as hath not been from the beginning of the world until now, neither shall be. And unless those days had been shortened, no flesh should be saved: but for the sake of the elect those days shall be shortened. "Then if any man shall say to you, 'Lo here is Christ,' or 'there': do not believe him. For there shall arise false Christs and fa