The following are some of the fountains that can be found in St. Peter’s Square:

Maderno Fountain: this fountain was redesigned by architect Carlo Maderno after being commissioned by Pope Paul V. The design is that of an octagonal base with a large irregular basin at the top. It also has small columns and steps which hold water. The new design is also comprised of a large lower stone vasque, which the old fountain had possessed also as well as four stone scrolls. The top of the fountain is a cap in shape of a mushroom, which is covered with stone scales. Water from the top of the fountain pours down over the top of the upper vasque. The fountain was designed in such a way that it did not operate by pumps but purely by gravity. This was facilitated by the fact that the source of water for the Maderno Fountain was higher than the fountain itself. This caused the water to shoot upwards by the power of gravity. In 1641, this fountain was said to be the most beautiful fountain in the whole of Europe.

Bernini Fountain: it is located on the southern side of St. Peter’s Square. It was created by Gian Lorenzo Bernini between 1667 and 1677. The fountain was commissioned by Pope Clement X. Bernini built the fountain for ten years and its design followed earlier designs.

Therefore if you are planning to visit Rome, do not miss out on a visit St. Peters square and its fountains. They are among the tallest and most beautiful fountains in the Vatican City. You will meet attendants who will give a brief history of the fountains and explain every detail about these fountains. If you are allowed to enter St. Peter’s square then there are no restrictions on viewing and taking photos of these fountains. The fountains also discharge very clean water and are well maintained. Source 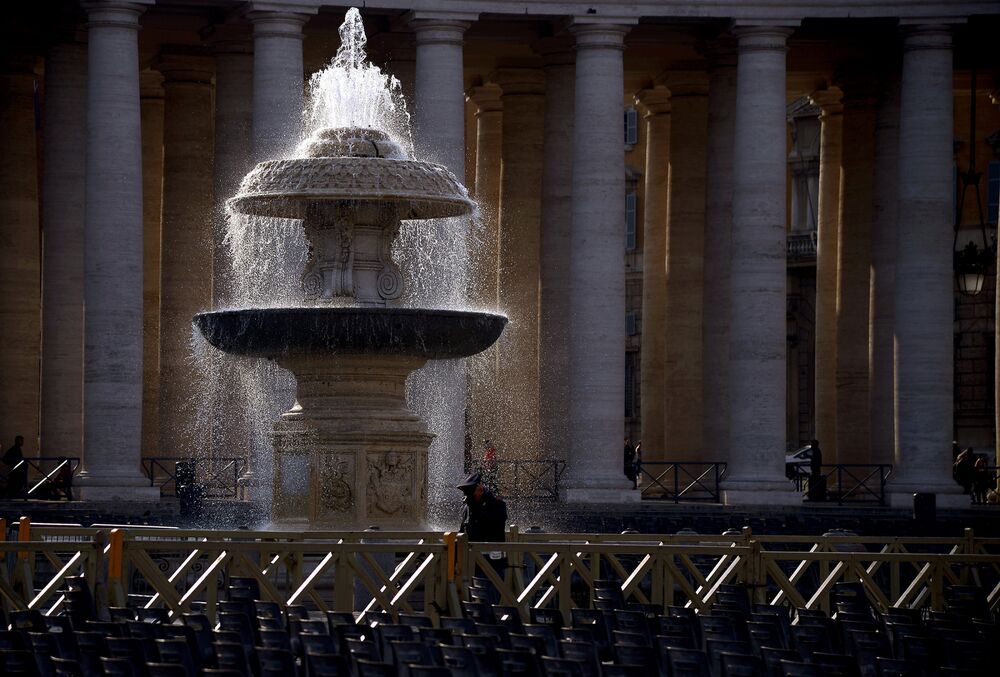 Vatican to Shut Off St. Peter's Square Fountains Due to Italy's Drought

Vatican City (AP) -- The Vatican says it is shutting off all its fountains, including those in St. Peter's Square, because of Italy's drought. Vatican Radio on Monday said the decision is linked with Pope Francis' teachings on the environment. The pope has decried wasteful practices and praised clean drinking water as vital for both people and the environment. Meteorologists say spring 2017 was Italy's third-driest in some 60 years. The drought has put Rome at risk for drastic water rationing, a measure being considered later this week by authorities. Vatican Radio said all of Vatican City's fountains will go dry, including those in its gardens, to help save water. Francis laid out his fears for the future of the world's environment in a 2015 encyclical, a formal teaching document. Source First Tim In Vatican History That Fountains Had To be Turned OFF!

Vatican spokesman Greg Burke said it was the first time authorities in the spiritual home of the world's 1.2 billion Catholics could remember being forced to turn off the fountains. Standing in St. Peter's Square, where two fountains by 17th-century sculptors Carlo Maderno and Gian Lorenzo Bernini stood dry, Burke said the Vatican wanted to help. "This is the Vatican's way of living solidarity with Rome, trying to help Rome get through this crisis," he told Reuters TV. Source