As the Pope spoke on bridge-building, a bridge in northern Italy collapsed killing one and injuring five.

First the Pope's address on bridge-building:

(Vatican Radio) Pope Francis on Friday addressed the organizers and participants in the first-ever International Conference for the Vicars and Episcopal Delegates for Consecrated Life. Organized by the Congregation for Institutes of Consecrated Life and Societies of Apostolic Life for the purpose of the conference is to respond to the call, which the Holy Father made to Pastors of particular Churches around the world when he proclaimed the Year for Consecrated Life, “[T]o show special concern for promoting within [their] communities the different charisms, whether long-standing or recent.” In the Letter, the Holy Father went on to ask them to do this by support and encouragement, assistance in discernment, and, “tender and loving closeness to those situations of suffering and weakness in which some consecrated men or women may find themselves.” “Above all,” Pope Francis wrote, “do this by instructing the People of God in the value of consecrated life, so that its beauty and holiness may shine forth in the Church.” In remarks prepared for the roughly 200 people involved in the initiative and delivered in the Clementine Hall of the Apostolic Palace on Friday, Pope Francis spoke of the bridge-building and relationship-strengthening roles of Vicars and Delegates – especially those serving newer communities and congregations. “Build mutual relations on the basis of an ecclesiology of communion, on the principle of co-essentiality, and on the autonomy that belongs rightfully to consecrated persons.” The three-day formation congress is being hosted by the Pontifical University Antonianum, the flagship university of the Franciscan order in Rome, and closes Sunday. Vatican Radio

Now for the story on the bridge collapse.

One man has been killed and five other people have been injured in Italy after a bridge collapsed over a busy road. The bridge, in Lecco province near Milan, fell when a heavy goods vehicle was crossing, crushing cars below. The company which runs Italy's main roads has blamed local authorities, saying it had demanded the immediate closure of the bridge hours before Friday's accident. A preliminary criminal investigation has been opened. The accident occurred around 17:20 (15:20 GMT) as an articulated lorry carrying a specially authorised heavy weight (108 tonnes) was using the bridge. At least four other cars were involved in the accident - one was completely crushed underneath the fallen bridge. Anas, Italy's road authority, insisted it had asked for the bridge to be closed at about 14:00 after one of its workers spotted problems. It said Lecco province officials had demanded the information in writing - which required a formal inspection of the site. However, the bridge had collapsed before an inspector could reach it. Lecco authorities have denied Anas's version of events. BBC Read More>>>>>> 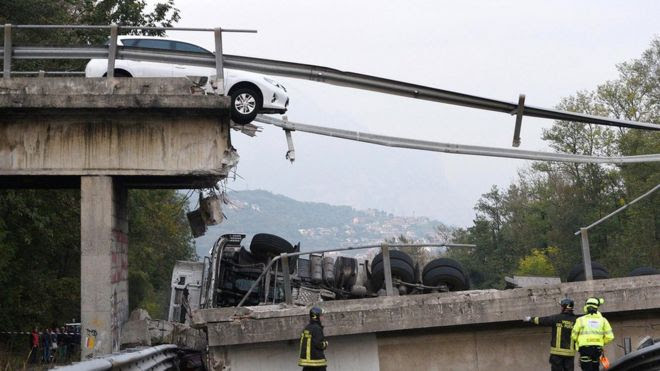 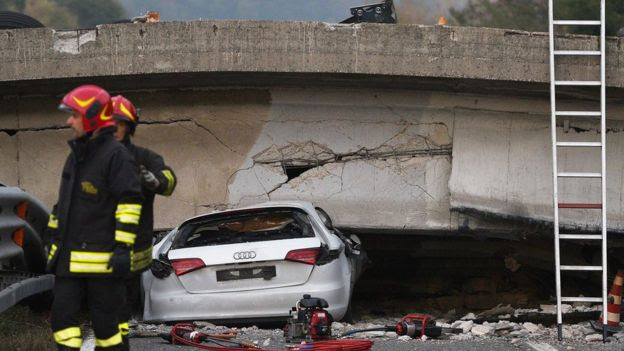