Joseph Shaw To The Ignorant Fool Taylor Marshall And His Deranged Fans......."I Call On Marshall To Apologise To The FSSP & IKC"

Joseph Shaw @LMSChairman Chairman of the Latin Mass Society
Taylor Marshall, a man I usually ignore, has insulted the signatories of this statement, as lacking the "brave and bold" spirit which, he claims, animated the late Archbishop Lefebvre. He is, in a video far too tedious to link to, claiming that they are cowards.
This is a contemptible accusation, which reveals Marshall to be, as I expressed it on Twitter, an ignorant fool. I stand by that judgement, and I call on Marshall to apologise to these good men and women, who have a fearful responsibility both to their professed members, and also, in most cases, to the lay faithful for whom they have pastoral care. 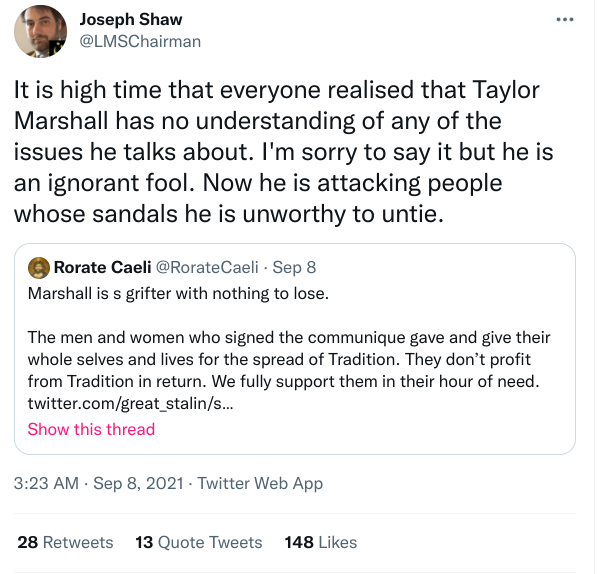 Marshall appears to imagine that the Superiors General should react to their complex situation with the subtlety of some Hollywood action-hero: an attitude, in fact, completely at odds with the historical reality of Archbishop Lefebvre himself. What, Marshall seems to be asking, would Rambo do? What would be the reaction of some knuckle-headed character played by Mel Gibson? Well, if he wants to base his understanding of ecclesial politics on Braveheart, he should remember the advice given by the Duke of Argyle (in the 1995 film) to the young William Wallace: "First learn to use this" (pointing to his head), "and then I will teach you to use this" (lifting his sword).
It is an interesting fact about social media that some people who witnessed Marshall's insult of the Superiors General, and my own criticism of Marshall for making this insult, concluded that I was the one to be blamed for dividing Traditional Catholics. This is an attitude completely detached from reality. The restoration of the Church is carried out through the sacraments offered by Traditional priests, and through the lives of prayer and sacrifice represented by the Traditional Institutes and communities, not by monetised social-media clicks. We need to show solidarity, in this moment of crisis, with the Superiors General, not with the man who likes to remind his viewers "I'm just a dad with a webcam".
To the Superiors General, I say: genuine Traditional Catholics have your back. If this separates me from Taylor Marshall and his more deranged fans, so much the better.  Source