Our Lady Of LaSalette On Strange Disease Kills Seven Persons, Eight Others Hospitalised in Enugu, Nigeria 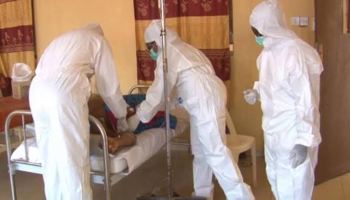 “There will be bloody wars and famines, plagues and infectious diseases. It will rain with a fearful hail of animals.Our Lady of La Salette 19 Sept. 1846 (Published by Mélanie 1879)
“The earth will be struck by calamities of all kinds (in addition to plague and famine which will be wide-spread). Our Lady of La Salette 19 Sept. 1846 (Published by Mélanie 1879)
“God will strike in an unprecedented way. Our Lady of La Salette 19 Sept. 1846 (Published by Mélanie 1879)
“Woe to the inhabitants of the earth! God will exhaust His wrath upon them and no one will be able to escape so many afflictions together. Our Lady of La Salette 19 Sept. 1846 (Published by Mélanie 1879)
“The Society of men is on the eve of the most terrible scourges and of gravest events. Mankind must expect to be ruled with an iron rod and to drink from the chalice of the wrath of God. Our Lady of La Salette 19 Sept. 1846 (Published by Mélanie 1879)
Strange disease kills seven persons, eight others hospitalised in Enugu
No fewer than seven persons have reportedly died from a yet-to-be-confirmed disease at the New Artisan Market, Enugu, while eight others were in critical conditions. The Chairman of the Livestock Market, Alhaji Danladi Abubarkar, who disclosed this yesterday in a chat with newsmen, said the deaths occurred in the early hours of the day.  Abubarkar said residents in the market area woke up to discover the dead bodies, which included four men and three women.He said that all the affected persons, which included tricycle riders, artisans and others from different households, were stooling and vomiting. “The bodies are still in their rooms as we speak. We shall soon proceed to the cemetery to bury the Muslims among them while the Christians will be taken by their relatives,” he said. Officials of the Enugu State Ministry of Health had already visited the area to investigate the course of the deaths. The leader of the team, who pleaded anonymity, described the situation as worrisome, saying all the deceased were in no way related. The source said that there could be a possible outbreak of epidemic in the area, adding that medical doctors at the Enugu State University Teaching Hospital had been alerted. He directed that those in critical conditions should be immediately rushed to the said hospital and the eight persons were immediately taken to the place in a bus with the inscription, ‘Olamaboro Local Government Council’. When contacted, the Executive Secretary, Enugu State Primary Healthcare Development Agency, Dr. George Ugwu, said that it was premature to speak on the matter, as no one was sure on the cause of the deaths. Source
PROPHECY OF MELANIE ON TWO POPES:
"I didn't see, I don't see any Great Pope or Great Monarch before an extremely great tribulation, horrifying, terrible and general for all Christendom. But before that time, twice there will be a short lived peace; TWO shaky, servile, doubtful popes" Mélanie