Pope Francis Answers RAD TRAD Ann Barnhardt's Accusation That He Practices Witchcraft! “First Of All I Would Like To Say I Do Not Resort To Witchcraft!”

Pope Francis on the plane response to the Rad Trads who accused him of Witchcraft:

Here's his response when one journalist asked him where he finds the energy and strength needed to travel and work as he does.

“First of all I would like to say I do not resort to witchcraft!” the Pope said. 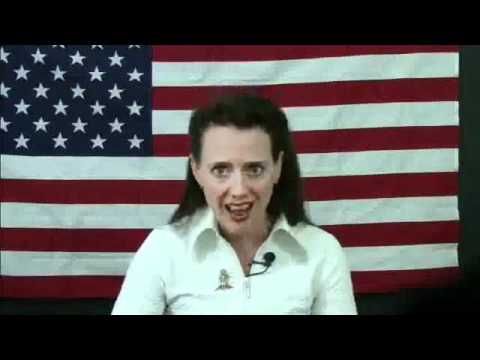 As I have said and written before, one of satan’s most clever moves has been to foment, encourage and push mentally ill and demonically oppressed people to LOUDLY broadcast insane, ridiculous, totally false “conspiracy theories”. We all know the types and categories. Mind control beams, “chem trails”, shape shifting lizards, underground civilizations, flat earthers, the list goes on and on and on.

What this has done is make it almost impossible to point out, discuss, and warn about ACTUAL sinister goings-on and actual, honest-to-goodness conspiracies that are very real. We all know that the word “Freemasonry” in the U.S. is automatically lumped into the above category, even though in Europe Freemasonry is largely understood to be the extremely powerful and influential socio-political entity that it is, and many Europeans further understand that the core of Freemasonry is the desire to exterminate the Catholic Church and replace it with the one-world secular humanist political religion of Freemasonry.

Trying to warn about such things as the musloid political system gets one lumped in with “conspiracy theorists”, as does trying to warn about the massive infiltration, influence, power and agenda of the sodomite cabal, both in the secular realms of politics and entertainment, AND in terms of the infiltration of the Institutional Church.

Perhaps the most difficult actual conspiracy to discuss without being dismissed out of hand is the actual cult worship of satan. But, it is real, and it is manifesting before our eyes, so someone has to call these things out knowing full well that to do so means that 99.9999% of the populace will instantly call one a “crazy fool”. That’s fine. If fitting in to this culture constitutes sanity, then please God, let me never be sane.


It is a MORAL CERTAINTY that the stick that Antipope Bergoglio tried to pass off as a ferula yesterday in the Mass opening the Sin-nod on Sodomy is a “STANG”. Antipope Bergoglio said is was a “gift” from “young people” who SPECIFICALLY REQUESTED that he use it in the opening Mass of the Sodo-synod. That story right there by itself is DAMN PECULIAR.

A Stang is a witch/warlock’s ceremonial staff. It is always forked, and always has an iron nail driven through it. Ideally it has a human form carved or integrated into it somehow. The Stang signifies several things, the first being a satan himself. Read the quote below from a witchcraft blog:

“Gary describes the Stang as primarily a symbolic tool rather than a working one, and as such it stands in for the Devil himself, holding his power and his dual nature. The Devil and the Stang is often less about strict duality and more about the transgressing of boundaries, The Devil being a spirit I often think of as non-binary and difficult to define in terms of absolutes.”

Sounds familiar, eh? Like every Casa Santa Marta sermon, and every airplane presser? Yeah. That’s mild compared to this quote from the same article:

“The witch is bound to no dogma. This makes them a threat to a Christianity established on doctrine. The witch insists everything in creation has its place. The Church insisted on two contrary substances God and The Devil. The witch strives for synthesis.” Nicholaj De Mattos Frisvold- Craft of The Untamed.

Let us revisit the quote of the Canadian faggot priest Tom Rosica, who is, once again, the English language press spokesman for this Sodo-synod from just a few weeks ago:

“Pope Francis (sic) breaks Catholic traditions whenever he wants because he is “free from disordered attachments.” Our Church has indeed entered a new phase: with the advent of this first Jesuit pope (sic), it is openly ruled by an individual rather than by the authority of Scripture alone or even its own dictates of tradition plus Scripture. “ -Fr. Tom Rosica, Vatican press spokesman

Anyway, the iron nail in the Stang symbolizes multiple things, including a phallus/coitus, a mocking of the Crucifixion of Our Lord, and is the triple motif of the threefold serpentine, telluric and cainic “powers”.

The “serpentine” meaning is obvious – the devil himself, in the garden, “gifting” Adam and Eve with the “liberating” and “enlightening” words, “No, you shall not die the death. For God doth know that in what day soever you shall eat thereof, your eyes shall be opened: and you shall be as Gods, knowing good and evil.“

The word “telluric” refers to earthly power, whose source and symbol is “the serpent”, “deep in the earth”.

The third motif symbolized by the iron nail in the Stang is the Cainic “powers”. Now, hold on to your hats. Here’s the opening from the Wiki article on “Cainism”, and remember folks, we are talking about Cain, whose sacrifice God rejected and he thus murdered his brother Abel because as St. John teaches, “Cain slew Abel because his works were evil, while those of his brother were just (1 John 3:12), and we read in Hebrews that “by faith Abel offered to God a more excellent sacrifice than Cain” (Hebrews 11:4).” The oldest source is to be found in Irenaeus, adv. Haer. i. 31.

He tells us that the Cainites regarded Cain as derived from the higher principle. They claimed fellowship with Esau, Korah, the men of Sodom, and all such people, and regarded themselves as on that account persecuted by the Creator. But they escaped injury from Him, for Sophia used to carry away from them to herself that which belonged to her.

—— One thing I learned in researching the actual cult worship of satan once I learned about and confirmed that the Vatican is the nexus of satanism in the world today, is the fact that satanists are commanded, at some point once they have sufficient power, to openly MANIFEST their satanism.

If the Bergoglian antipapacy doesn’t constitute “having sufficient power”, then I don’t know what would.

I am morally certain that Antipope Bergoglio’s carrying of a Stang with the iron nail so prominently positioned, into the opening of a farce synod whose entire agenda is the ratification of sodomy, is a clear case of manifestation of satanism.

And if that makes me a conspiracy theorist, so be it. Some conspiracies are real.

St. Michael the Archangel, defend us in battle, be our protection against the wickedness and snares of the devil. May God rebuke him, we humbly pray, and do thou, O prince of the Heavely Host, by the power of God, cast into hell satan and all evil spirits who prowl throughout the world seeking the ruin of souls. Amen. 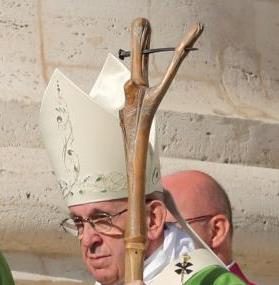