Men are punished sooner or later for their impiety and irreverence during the Holy Sacrifice.

Both the Priests and Laity are to blame

None of you behave yourselves during the New Mass - NONE.

The punishment comes in the form of:

During the next punishment I will try to identify the Mass Site where the impiety or irreverence takes place.

Feb 22 (Reuters) - A deep earthquake with a magnitude of 7.5 struck the Peru-Ecuador border region early on Friday morning, the United States Geological Survey said. The quake's epicentre was in a sparsely populated area 224 km (140 miles) east-southeast of Ambato, Ecuador, at a depth of 132 km. The USGS's initial reading had assessed the quake, which occurred at 5:17 a.m. (1017 GMT), at magnitude 7.7. There was no risk of a tsunami being triggered, the Pacific Tsunami Warning Center said, and there were no initial reports of casualties or damage. One resident in Cuenca, Ecuador, 253 km from the epicentre, described the temblor as very strong, while a second resident in the same city reported experiencing "a good 30 second shake", according to witness statements on the European-Mediterranean Seismological Centre website. Source

Here is a map of the Catholic Churches in Ambato, Ecuador where all of the Churches offer the New Mass and where one can find everyone behaving irreverently and impiously: 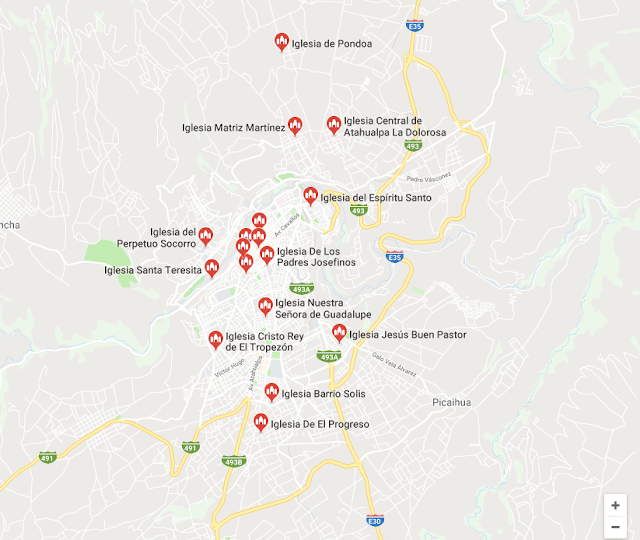 You don't believe me that NONE of you BEHAVE yourselves before during and after the NEW MASS?

Take a good meditation book with you to a Latin Mass

Meditate before the Latin Mass starts using the book. (look down - read - look up & reflect etc)

Meditate during the Latin Mass - without the book just follow the ]Mass and the actions of the priest and think or reflect on the Meditation.

Meditate after the Latin Mass using the book...etc..

Now go find a New Mass and do the same.

Go ahead I dare you to try to Meditate before during and after the New Mass - IT CAN'T BE DONE!

So yeah....punishment is coming your way...