Pope Francis Flying In The Habitat Of Demons Says Mothers Who Regret Abortions Should Talk To Babies In Heaven. Abortion = Salvation 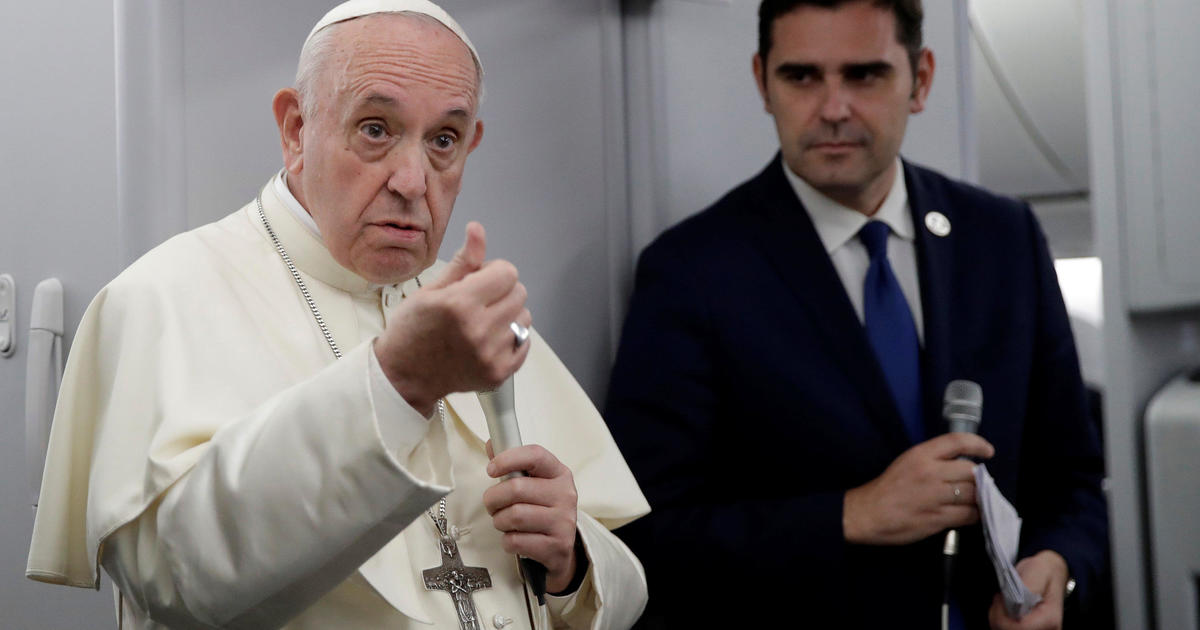 Flying on commercial flights at a cruising altitude of  35.000 ft places one in the Habitat of Demons:

Pope Francis influenced by Demons of the Darksome Atmosphere says:


Mothers who regret abortions should talk to babies in heaven

Pope Francis spoke about abortion Sunday evening as he returned to Rome from the Panama World Youth Day, saying that a person truly understands the horror of abortion from within the confessional, hearing how women repent of their abortions.

The pope said that unborn babies must be given mercy, since “the message of mercy is for everyone.” And mothers who have aborted must also be given mercy, but, he said, it is a “difficult mercy” because the challenge is not in “giving forgiveness” but in accompanying a woman who has realized what she’s done.

“These are terrible tragedies,” he said.

“A woman when she thinks about what she did… but I tell you the truth, you have to be in the confessional and you have to give comfort there; you can’t say anything,” the pope reflected.

The Holy Father said that women “have to meet with their child.”

He continued: “I advise many times — when they call, they have this anguish: ‘Your child is in heaven, talk to him. Sing to him the lullaby that you have not sung… you have not been able to sing to him.’ And there is a way for the mother to reconcile with her child. With God there is already forgiveness; God always forgives. But mercy also, that you elaborate this. The tragedy of abortion, to understand it well, one must be in a confessional. Terrible.” Source

So, in other words - abort your baby send it to Heaven?

Only a devil would say such a thing.

Only one influenced by Demons of the Darksome Atmosphere would believe such a thing.

Here, read from a Saint on where the Demons reside:


Summa Th. I EN Qu.64 a.4
Article: 4 Whether our atmosphere is the demons' place of punishment?

I answer that The angels in their own nature stand midway between God and men. Now the order of Divine providence so disposes, that it procures the welfare of the inferior orders through the superior. But man's welfare is disposed by Divine providence in two ways: first of all, directly, when a man is brought unto good and withheld from evil; and this is fittingly done through the good angels. In another way, indirectly, as when anyone assailed is exercised by fighting against opposition. It was fitting for this procuring of man's welfare to be brought about through the wicked spirits, lest they should cease to be of service in the natural order. Consequently a twofold place of punishment is due to the demons: one, by reason of their sin, and this is hell; and another, in order that they may tempt men, and thus the darksome atmosphere is their due place of punishment. Now the procuring of men's salvation is prolonged even to the judgment day: consequently, the ministry of the angels and wrestling with demons endure until then. Hence until then the good angels are sent to us here; and the demons are in this dark atmosphere for our trial: although some of them are even now in hell, to torment those whom they have led astray; just as some of the good angels are with the holy souls in heaven. But after the judgment day all the wicked, both men and angels, will be in hell, and the good in heaven.She said: 'These ionospheric thunderstorms are well known, but it's only now we have been able to show a direct link between them and the loss of the GPS. 'This is possible because the Swarm satellites provide high resolution observations of both phenomena at one spacecraft.'