Will The Ukrainian Orthodox Church UNITE With ROME And Accept Pope Francis As Their Pope?

The largest bloc in the 260-million-strong congregation of Orthodox Christianity is no longer a single religious body governed from Moscow. The implications of this decision, announced by ecclesiastical authorities Thursday evening, are far-reaching, dislodging a cornerstone of the Orthodox Church that was established more than three centuries ago.In a statement expected for several weeks, a synod convened by the Ecumenical Patriarch of Constantinople Bartholomew I—designated “the first among equals” in the global hierarchy of Orthodox Christian prelates— acknowledged the right to independence of the Ukrainian Orthodox Church, which has been overseen by religious officials in Moscow since 1686. Source 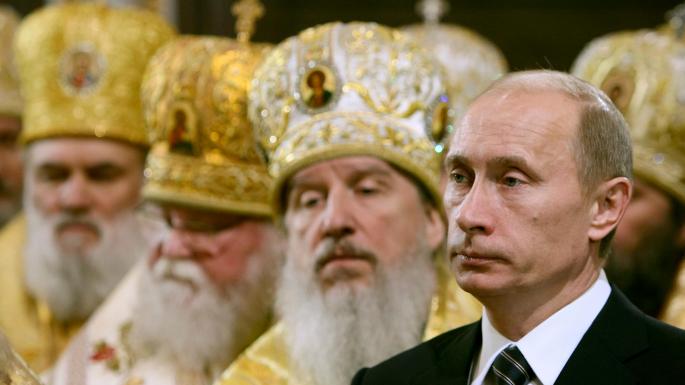 The following is the greeting the Holy Father Francis addressed to the delegation from the Patriarchate of Moscow, whom he received in the study of the Paul VI Hall before the general audience on Wednesday 30 May:

Greeting of the Holy Father

Thank you so much for your visit, and also for this meeting, which helps us so much to live our faith in unity and in the hope to walk together. I am happy to take the road of unity with you: the only road that promises us something certain, because the path of division leads us to war and destruction. And before you I would like to reiterate – in a special way before you, my dear brother, and before all of you – that the Catholic Church will never allow an attitude of division to arise from her people. We will never allow ourselves to do this, I do not want it. In Moscow – in Russia – there is only one Patriarchate: yours. We will not have another one. And when some Catholic faithful, be they laypeople, priests or bishops, raise the banner of Uniatism, which does not work anymore, and is over, then it causes me pain. The Churches that are united in Rome must be respected, but Uniatism as a path of unity is not valid today. Instead it brings me comfort when I find this: the extended hand, the fraternal embrace, thinking together, and journeying. Ecumenism is made by journeying. We walk. Some think – but this is not right – that there must first be doctrinal agreement, on all the points of division, and then the journey. This does not work for ecumenism, because we do not know when agreement will come. I once heard a man of the Church, a man of God, who said: “I know which day a doctrinal agreement will be signed”. They asked him: “When?” – “The day after the coming of the glorious Christ”. We must continue to study theology, to clarify the points, but in the meantime let us walk together, let us not wait for these things to be resolved in order to walk, no. We journey together and also do this, but walking in love, in prayer; as in this example of the relics. Prayer together, for each other, in dialogue. This is so good. The meeting with His Holiness Kirill was very good for me, I found a brother. And now, spiritually, we walk together.

And a couple of words to finish. One on the respect of Catholics towards you, Russian Orthodox brothers: the Catholic Church, the Catholic Churches must not get involved in internal matters of the Russian Orthodox Church, nor in political issues. This is my attitude, and the attitude of the Holy See today. And those who meddle do not obey the Holy See. This regards politics. The second thing: piety. It is important that we pray for each other, also in personal prayer. We know new brothers and sisters, and then there is also personal prayer. I would like to say something to you: when we met with the Patriarch, afterwards he sent me a relic of Saint Seraphim. I keep that relic on my nightstand, and at night, before going to bed, and in the morning, when I get up, I venerate it and pray for our unity.

Thank you very much. Let us pray for each other. Let us bless each other. And let us go together. Thank you. Source