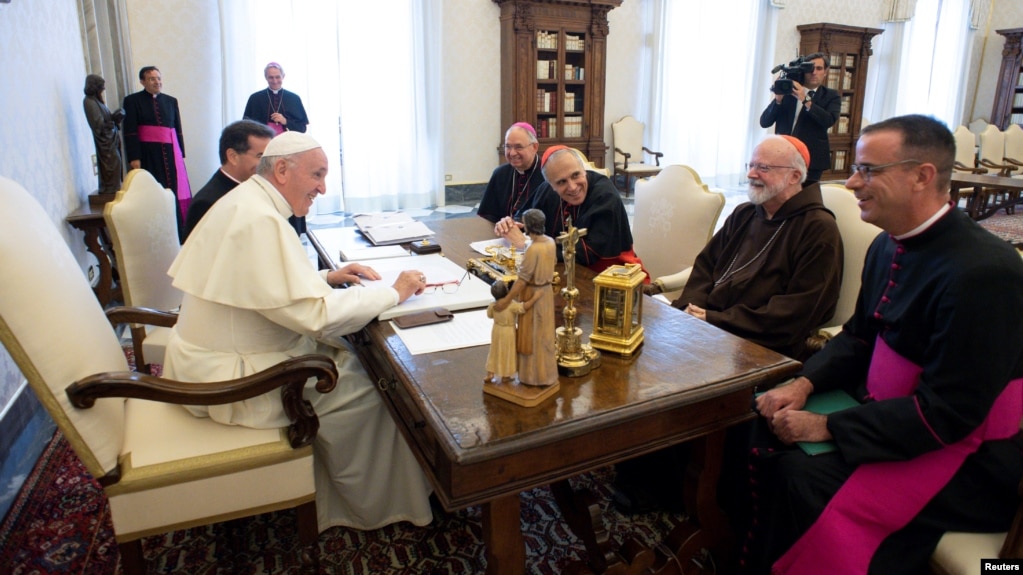 Pope Francis on Thursday received a delegation of the leadership of the U.S. Bishops Conference at the Vatican to discuss the Church’s response to the clerical sex abuse crisis.

Following a private audience with Pope Francis on Thursday morning in Vatican City, Cardinal Daniel DiNardo of Galveston-Houston and President of the United States Conference of Catholic Bishops issued the following statement regarding the recent moral crisis in the American Catholic Church.

"We are grateful to the Holy Father for receiving us in audience. We shared with Pope Francis our situation in the United States - how the Body of Christ is lacerated by the evil of sexual abuse. He listened very deeply from the heart. It was a lengthy, fruitful, and good exchange.

As we departed the audience, we prayed the Angelus together for God's mercy and strength as we work to heal the wounds. We look forward to actively continuing our discernment together identifying the most effective next steps." Source

THEN THIS SAME DAY IN US:

Florence Slows to a Crawl Off Coast of North Carolina

Hurricane Florence has begun its long-awaited slow down, and was crawling at just 5 mph to the west-northwest towards Wilmington, NC as of 5 pm EDT Thursday. Heavy rains, a significant storm surge, and high winds from the Category 2 storm are already hitting the coast of North Carolina. Florence may be a Category 2 hurricane by the Saffir-Simpson wind scale, but it is a Category 5 heavy rain and inland flooding threat, and a Category 3 storm surge threat. Source