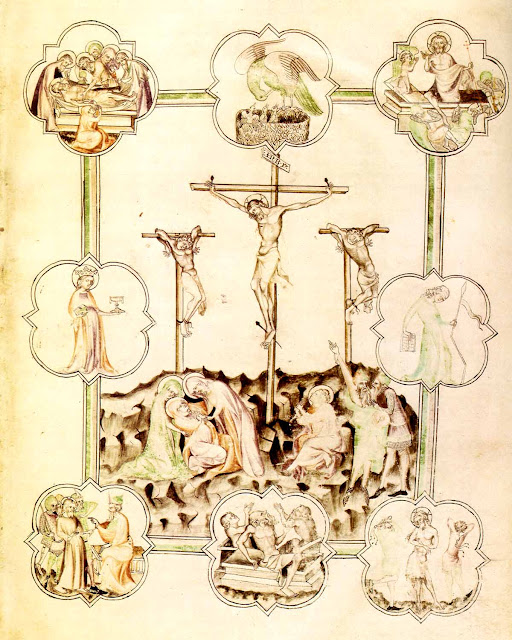 Pelican: The Pelican is a symbol of the atonement and the Redeemer and is often found in Christian murals, frescos, paintings and stained glass. The pelican was believed to wound itself in order to feed its young with its own blood. In the hymn "Adoro Te," St. Thomas Aquinas addresses the Savior with, "Pelican of Mercy, cleanse me in Thy Precious Blood." Allusion is even made to this belief in "Hamlet" (act iv): "To his good friend thus wide I'll ope my arms And, like the kind, life-rendering pelican, Repast them with my blood." Source

Pious Pelican, Lord Jesus,
unclean as I am, cleanse me with thy blood,
one drop of which can redeem me and wash away every sin.

Thus in a hymn St. Thomas Aquinas not only embodies a fable once believed by all, but offers an example of a fashion common in the devout literature of the Middle Ages. What, then, is the nature of this fable ? The pelican, in order to regurgitate the food which it brings to its young, presses its beak against the food- carrying pouch, and the pouch against its breast. Thus the food is squeezed up and out for the clamouring little pelicans, which, in their hunger, might easily seem to a careless observer to be using their great clumsy beaks against the parent bird. On the basis of this natural occurrence arose a legend believed everywhere and by probably all for fully fifteen hundred years.1 Alexander Neckam's version will serve as a type containing all that is essential to understand the lines in Dante.

' Now the nature and the customs of that bird,' says Neckam, 'are wont to be referred to Christ Himself. This bird slays its young, and the transgression of the command given by our Lord to our first parents caused them to incur death. Verily all the posterity of Adam were slain; for they were given over to punishment and to death. Three days the pelican mourns for its young, and for three days of His passion, in a certain way, the Lord mourned for His own. This bird opened its side and sprinkled its young with blood. So, too, from the opened side of our Lord flowed out the sacrament of our redemption.'

This is the one who lay upon the breast
Of Him our Pelican ; and this is he
To the great office from the cross elected.
— Longfellow.

Is Dante following tradition when he takes the Pelican as a symbol of Jesus Christ? The answer may be given by Didron.4 ' Christ,' writes Didron,

' is symbolised by the lion, better still by the lamb ; but He is only figured by the pelican. The pelican opening his heart to feed his young with his blood is the figure of Jesus who shed in death all the blood in His veins to redeem men. But never does the pelican bear a nimbus, much less a cruciferous nimbus. Never in the court of heaven does the pelican represent Jesus Christ, nor attend in that quality on the events which there come to pass.'

1 In almost every version of the Physiologus both in Latin and in the vulgar tongues, by Brunetto Latini, p. 217 ff., by St. Epiphanus, Isidor of Seville, Vincent of Beauvais, Hugo of St. Victor, and a thousand others, clerics and laymen, poets and encyclopedists.

4 Iconographie Chrltienne, p. 350. The fabulous pelican may be seen in hundreds of medieval illuminations and was often carved on churches. A lectern composed chiefly of a pelican rending its breast may be seen in a church at Haarlem and in that of Ste. Anne at Douai.

From: Dante And The Animal Kingdom
Richard Thayer Holbrook
Chp. xlvii The Pelican 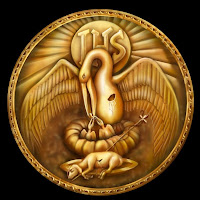 Cause Of Young, Starving Pelicans Appearing In OC And LA Counties Remains A Mystery

HUNTINGTON BEACH (CBSLA) — Wildlife experts are trying to figure out what is happening to young, starving pelicans that have been appearing across Orange County, after more than a dozen of the sickly birds were found in the past three days. The Huntington Beach Wetlands Conservancy usually sees five sick pelicans during an entire month. “For some reason, we’re getting a lot of very young pelicans coming in […] emaciated, they have not had any food or water, they’re disoriented,” John Villa with the agency told CBS2 News. Villa said the birds are being found all over the OC and Los Angeles County. “This seems to be occurring from south Orange County, all the way up to Malibu,” said Villa. The cause? “It is a mystery,” said Villa, who added they have ruled out a food shortage. “People are finding these sick birds in places where pelicans don’t normally hang out,” Villa said. One of the pelicans was found in a Pasadena parking lot. “That’s not their normal habitat, so that would be a clue that there might be issues with that animal,” said Villa. He said the animals are usually “pretty skittish,” but some pelicans have allowed people to pick them up. Source