Doom for these ten nations that Pope fly over sending his Doom Telegrams to the Heads of State:
Will keep you posted on each doom event that will take place in ach of these nations over the next 10 days.....

The only Doom so far is found in Brazil: 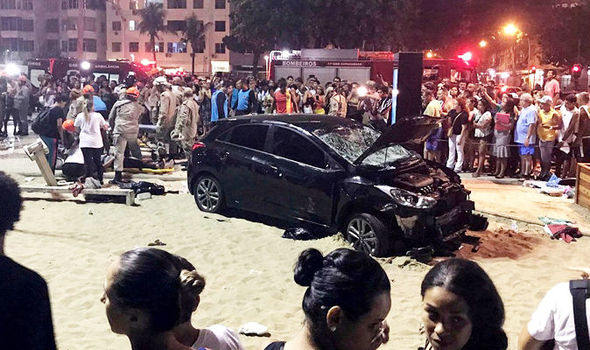 Police revealed an eight-month old baby died at the scene.  At least 17 people were hit by the out of control car.  The driver reportedly tried to escape but was then arrested by the police.  Colonel Angelotti from the local police force has confirmed the driver is suspected of having a “blackout” because of epilepsy. The police chief said a box of medicine was found in his car.  The black Hyundai car was said to be driving along the Avenida Atlântica road before unexpectedly crossing the bike path and boardwalk to end up on the sand of the beach.. Source

Sao Paulo, January 18, 2018--Brazilian authorities should launch a thorough investigation into the murder of reporter Ueliton Bayer Brizon, and bring those responsible to justice, the Committee to Protect Journalists said today. An unknown assailant on the morning of January 16 shot Brizon dead as he drove his wife to work in the city of Cacoal in Amazonia's Rondônia state, according to the journalist's colleagues and news reports. The suspect shot at the couple's motorcycle, causing the wife, who was not hit, to fall off, Siderlandio Simões de Oliveira, the president of the local Cacoalense Press Association, told CPJ. Source

SAO PAULO (Reuters) - Brazilian soccer great Pele has collapsed with exhaustion and been forced to cancel a long-planned trip to London this weekend, the Football Writers Association (FWA) said on Friday.The FWA was due to host a dinner in his honour at the Savoy hotel on Sunday but said the 77-year-old would not make it. “In the early hours of Thursday morning, Pele collapsed and was taken to hospital in Brazil where he has undergone a series of tests which appear to point to severe exhaustion,” the FWA said in a statement. “He remains on fluids while doctors monitor his recovery. Thankfully, there is no suggestion of anything more serious than exhaustion.” Source

Will keep you posted of more DOOM...