More than 2,700 flights are cancelled, schools are shut and drivers are told to stay off the roads as intense 'bomb cyclone' bears down on the Northeast after rare snowfall in Florida and the southeast

Airlines have canceled more than 2,700 flights scheduled for Thursday and extremely hazardous driving conditions are expected throughout the Eastern seaboard late Wednesday and into Thursday thanks to a major winter storm that will bring blizzard conditions from the coastlines of Maine all the way to Virginia.  In New York, snow began to fall in Queens before dawn, with winter storm Grayson expected to bring as much as nine inches in some of the five boroughs. The snow, ice and high winds are expected to last until Thursday evening.    Most of the flight cancellations were for flights scheduled to depart or arrive at some of the large Northeast airports, including Boston's Logan International Airport, New York's John F. Kennedy International Airport, LaGuardia Airport, and Newark International Airport.  According to FlightAware, nearly 600 Thursday flights have been delayed. The total number of cancellations for Thursday is approaching 2,800 flights.   The airlines canceled 500 flights on Wednesday.   Source

Now for the Train Crash in South Africa killing 18

A passenger train smashed into a truck at a level crossing in South Africa on Thursday, killing at least 18 people, injuring 254 and throwing several carriages off the rails.  Flames ripped through the twisted wreckage and choking black smoke rose into the air as desperate passengers clambered out of the train travelling from Port Elizabeth to Johannesburg to escape the inferno.  Tiaan Esterhuizen, who was travelling on the train as he returned from holiday, attempted to rescue three women who were trapped in a burning passenger wagon.  "I saw around 12 cars on their side and one was already burning. We heard some women screaming when we came closer` so a few of us climbed over the cars," he told the Times LIVE news site. Source 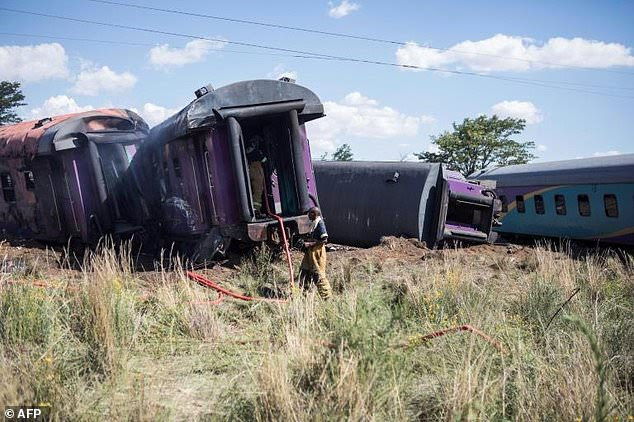 The third part of this doom - Automobiles has yet to occur yet........