Strange Signs Before The Death Of One of The TWO Popes: The Ceiling Collapse Of The Ta’ Giezu Church In Rabat, Malta 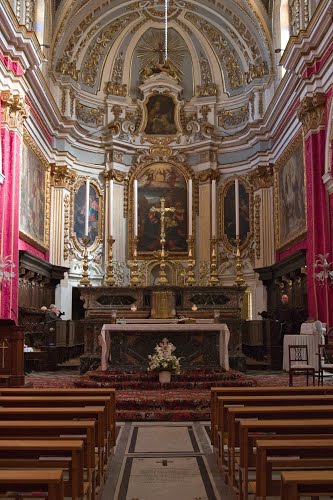 There should be warning just before the death of one of the TWO popes. Strange events.

Here is just one event:

The collapse of the ceiling of the Ta’ Giezu church in Rabat, Malta. The ceiling collapsed onto the Altar where the stripped and barren new mass is said.

Part of the ceiling of the Ta’ Giezu church in Rabat collapsed during the night. Nobody was inside the church at the time. Fr Martin Coleiro, the prior of the Franciscan Fathers who run the church, told The Malta Independent that he believes the wooden beams must have given way some time during the night. The accident was noticed this morning when the church, one of the oldest in Malta, was opened for Mass. However a man who lives close to the building told this newsroom that at around 1:30am he heard a loud noise coming from the church. Source

I'd say that this event constitutes as a strange event or portent - meaning that the death of one of the TWO popes is near at hand.


"I protest highly against a different text, which people may dare publish after my death. I protest once more against the very false statements of all those who dare say and write First that I embroidered the Secret; second, against those who state that the Queen Mother did not say to transmit the Secret to all her people." Melanie