At the first blow of His thundering sword, the mountains and all Nature will tremble in terror, for the disorders and crimes of men have pierced the vault of the heavens.Our Lady of La Salette 19 Sept. 1846 (Published by Mélanie 1879)

Pope prays for victims of landslide tragedy in China

(Vatican Radio) Pope Francis has expressed his closeness and grief for the victims of a landslide that engulfed a village in Sichuan province in south-western China. Speaking on Sunday after the recitation of the Angelus in St. Peters’ Square, the Pope said “I am close to the population of the Chinese village of Xinmo that was struck yesterday morning by a landslide caused by heavy rains”. “I pray for the dead and for the injured, he said, and for those who have lost their homes. May God comfort affected families and sustain rescuers.” Meanwhile almost 100 people remain missing after the huge landslide buried homes in Xinmo and hopes of finding survivors are fading. The bodies of fifteen people have so far been recovered, but many more are feared trapped beneath the rubble. Thousands of rescuers were deployed after some 40 homes were destroyed in Xinmo village in Maoxian county. Emergency workers have been digging through earth and rocks for a second day, with rescue dogs scouring the debris for some 93 people who remain unaccounted for. Source 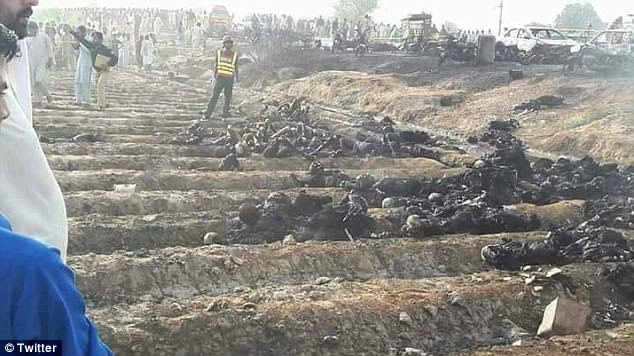 At least 153 people were killed and around 140 injured in a fire that broke out after an oil tanker overturned in central Pakistan and crowds rushed to collect the fuel. The tragedy came one day before Pakistan was due to begin Eid ul-Fitr celebrations marking the end of the holy fasting month of Ramadan, with many roads crowded as people travel home for the holidays. Images of the crash showed rising flames and a thick plume of smoke, along with charred vehicles.  The tanker crashed near the town of Ahmedpur East, 416 miles south of the capital Islamabad. Some 140 people were wounded, including 40 in critical condition, said Mohammad Baqar, an official with local rescue services, adding that the toll was expected to rise.  Daily Mail Read More>>>>>