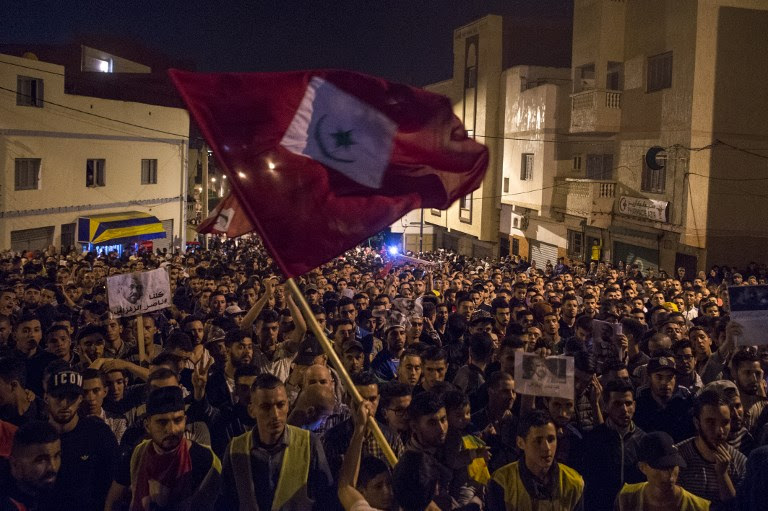 AL HOCEIMA, Morocco – Thousands demonstrated in northern Morocco for the sixth straight night Wednesday, May 31, as protestors demanded the release of the leader of a popular movement in the neglected Rif region. The area has been shaken by social unrest since the death in October of fishmonger Mouhcine Fikri, 31, who was crushed in a rubbish truck as he protested against the seizure of swordfish caught out of season. Initial protests in the fishing port of Al-Hoceima triggered a wider movement demanding more development and railing against corruption, repression and unemployment. Nasser Zefzafi, who has emerged as the head of the grassroots Al-Hirak al-Shaabi, or "Popular Movement", was arrested on Monday after three days on the run. On Wednesday around 2,000 protestors once again took to the streets of Al-Hoceima, shouting slogans such as "We are all Nasser Zefzafi" and "corrupt state". "Arrest us, we are all activists," read one banner.  Source

Human rights defenders issued a joint call on Thursday for Morocco to release protesters in Al-Hoceima, a northern city shaken by seven months of demonstrations against the marginalisation of their region. The statement comes a day after a court sentenced 25 demonstrators and suspected members of the grassroots protest movement to 18 months in jail each, according to their defence attorney. On Thursday the Civil Initiative for the Rif, which includes Moroccan human rights organisations and intellectuals, issued a report after conducting a tour of the restive northern region. It called for the release of the protesters so that a dialogue can be started, warning that “otherwise the inhabitants of Al-Hoceima will continue to demonstrate”. “Apart from this prerequisite, the government must take initiatives to satisfy social demands,” they added. The protests were “spontaneous”, had nothing to do with politics or trade unions, and there was no separatist motive, the group said, referring to accusations from politicians and state media. Source

Nightly clashes between protesters and Moroccan security forces in the flashpoint city of Al-Hoceima over the region’s marginalisation are turning more violent, a witness and a news website said Friday. “Around 100 residents gathered on an avenue (on Thursday night) to demonstrate. Security forces intervened in strength,” said one witness, contacted by telephone. “They were hitting people. Youths dispersed into sideroads and started throwing stones, while the police used tear gas,” the source said, adding that women were also attacked and several protesters hurt in running battles. Le Desk, a news website, said: “The nightly confrontations… are turning into a riot… into pitched battles with police, with stones being thrown and tear gas fired.” Source


Archbishop of Tangier, Morocco: “Immigrants are nothing to fear”

Meaning...get ready for the next wave of MUSLIM Immigrants to hit Europe's shores!


DOOM is Back! This is the fourth incident of running down the King of Morocco's motorcade.