Francis has judged himself a formal heretic. He is, therefore, an antipope. Source

See how much sway Ann & Louie have over Steve Skojec.

However Mélanie said that there would be TWO POPES:

Yes, that's TWO POPES until the council declares Pope Francis a heretic and deposes Francis. The you laymen can say that Francis is Anti-Pope.

Be careful what you wish for.

Let's say there is a council called to examine Pope Francis - the council could be a TWO for One special - deposing Pope Francis & The Consecration Of Russia to the Immaculate Heart Of Mary!

I do think its in the card - you trads will get what you want:

However there is a potential problem: 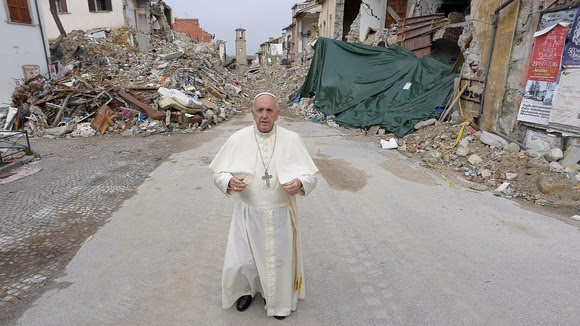 the Holy Father passed through a big city half in ruins and half trembling with halting step, afflicted with pain and sorrow, he prayed for the souls of the corpses he met on his way

The above is from the Fatima Secret.

The Holy Father is Pope Francis who survives a terrible earthquake the rest don't make it out alive.

I imagine the Four Cardinals who sent Pope Francis the DUBIA and most of the TRAD bloggers will not make it out alive - except of course for the fore-runner to the Anti-Christ Mr. Steve Skojec.

What city will this take place? Florence maybe.

Who knows. But What I do know is that the Vision of the Fatima Secret has not been fulfilled.

And of course the 35 years of Chastisements that Our Lady spoke of will not begin until both of the TWO POPES are dead - and this is to happen soon.

Oh and one more thing - because of the devastating Earthquake that kills most of the clergy and laity in attendance - there will be no Consecration of Russia to the Immaculate Heart of Mary.