Abu Dhabi Crown Prince HH Sheikh Mohamed bin Zayed Al Nahyan is due to meet with Pope Francis at the Vatican on Thursday as part of an official visit. Sheikh Mohamed, also Deputy Supreme Commander of the UAE Armed Forces, arrived in Rome on Wednesday with an official delegation. He will meet with Pope Francis to discuss bilateral ties between the UAE and the Vatican and ways to further develop them, official news agency WAM reported. The two leaders will also review joint cooperation efforts in promoting tolerance, dialogue, coexistence and interfaith values as part of efforts to achieve security, peace and stability in the region and the world. During his visit, Sheikh Mohamed will also meet with Cardinal Pietro Parolin, Vatican Secretary of State and other officials at the Vatican. He will also meet with Italian Prime Minister Matteo Renzi to discuss ways of developing friendship and cooperation between the two countries, and other bilateral issues. 
Pictured: Somali Minnesota mall knifeman, 22, described as a 'a soldier of the Islamic State' who stabbed nine people after checking they weren't Muslim

This is the man said to be responsible for the stabbing of nine people in Minnesota in an attack that ISIS has claimed responsibility for. Dahir A. Adan, 22, who was identified by his father to the Minnesota Star Tribune, was said to be a 'soldier of the Islamic state', according to an ISIS-linked news agency. A black and white photo from Adan's Facebook and reported by local media put a face to the name for the first time since Saturday night's attack. Adan immigrated to the United States from Africa, according to his father, and is of Somali descent. His father, Ahmed Adan, said Adan was born in Mombasa, Kenya, but did not say where the family immigrated from.  Daily Mail Read More>>>>>>>> 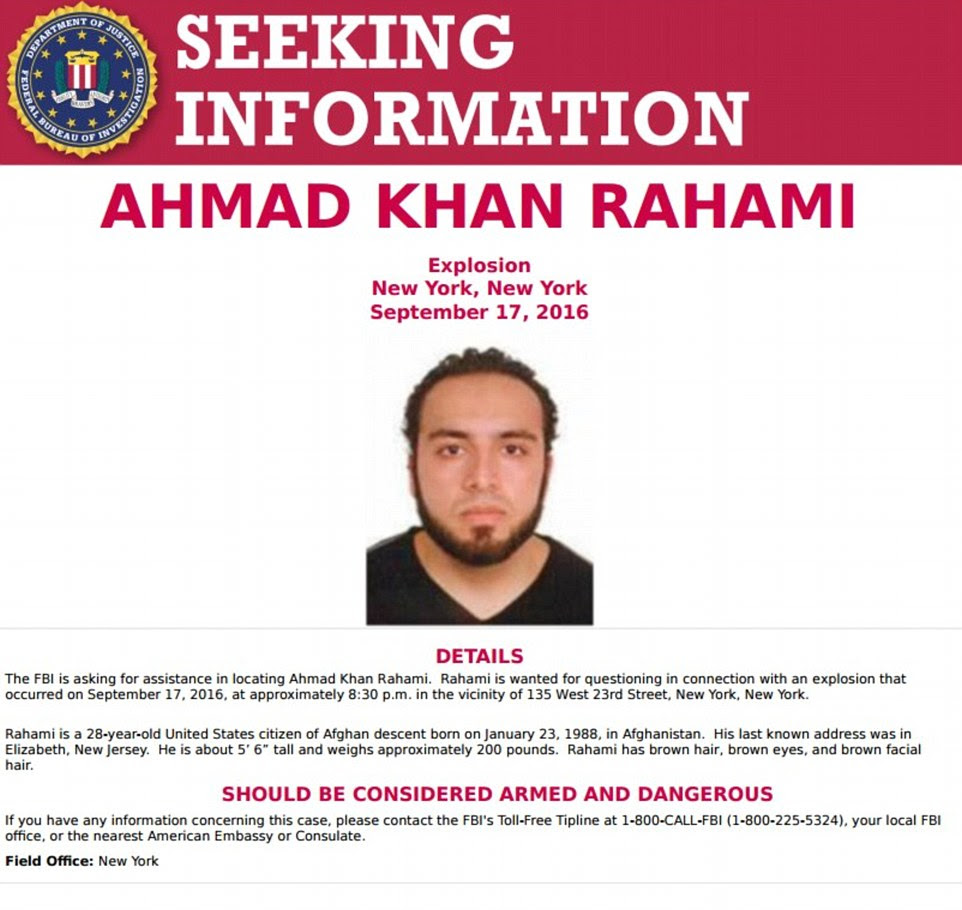 he man wanted in connection for two bombings and an attempted bombing in New York and New Jersey this weekend has been arrested after a shootout with police. A bar owner in Linden, New Jersey called police around 11am Monday morning, after finding 28-year-old Ahmad Khan Rahami sleeping in the entryway of his business. When police arrived on the scene, Rahami brandished a weapon and started shooting at the cops - injuring two. Officers eventually shot Rahami in the right shoulder and he was taken from the scene in an ambulance, handcuffed to a stretcher. Police released Rahami's picture Monday morning, saying he was wanted for questioning in connection to the Saturday bombings in New York City and Seaside Park, New Jersey, as well as the foiled bombing of the Elizabeth, New Jersey train station on Sunday. Law enforcement say it was fingerprints left behind on an unexploded pressure cooker bomb in Manhattan that led them to Rahami. Twenty-nine people were injured when another bomb placed a few blocks away was detonated Saturday night. Now that Rahami is in custody, investigators are now looking into whether he acted alone or was perhaps working with or for a larger terror network. Daily Mail Read More>>>>>>