Rotten Fruit Of Pope Francis & The Stripped And Barren News Mass: "Celibate" Catholic SODOMITES Coming Out Of The Closet? 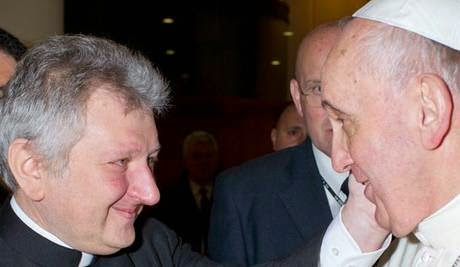 And true, it may seem like a stretch,
But its thoughts like this that catch
My troubled head when you're away
When I am missing you to death.........

The horrible and rotten fruit of Pope Francis & the stripped and barren new mass:


When Eve Tushnet converted to Catholicism in 1998, she thought she might be the world’s first celibate Catholic lesbian. Having grown up in a liberal, upper Northwest Washington home before moving on to Yale University, the then-19-year-old knew no other gay Catholics who embraced the church’s ban on sex outside heterosexual marriage. Her decision to abstain made her an outlier. “Everyone I knew totally rejected it,” she said of the church’s teaching on gay sexuality. Today, Tushnet is a leader in a small but growing movement of celibate gay Christians who find it easier than before to be out of the closet in their traditional churches because they’re celibate. She is busy speaking at conservative Christian conferences with other celibate Catholics and Protestants and is the most well-known of 20 bloggers who post on spiritualfriendship.org, a site for celibate gay and lesbian Christians that draws thousands of visitors each month. Celibacy “allows you to give yourself more freely to God,” Wapo Read More>>>>>

Still declare yourself a SODOMITE but claim you just don't do the deed.......