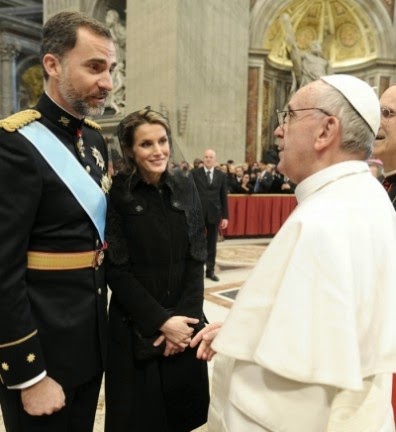 “The king and queen received us on their first week on the job, while the deputy prime minister did not even return our calls on the two occasions we requested a meeting with her,” - Boti García, president of the National Federation of Lesbians, Gays, Transsexuals and Bisexuals (FELGTB).

During the cordial discussions, satisfaction was expressed for today’s visit, their first trip abroad as reigning monarchs, which follows the recent visit by King Juan Carlos I and Queen Sofia on 28 April. It is hoped that this may mark the strengthening of the existing good relations between the Holy See and Spain.

The conversation focused on themes of common interest and the importance of promoting dialogue and collaboration between the Church and the State for the good of all Spanish society. Finally, mention was made of various problems of an international and regional nature, paying particular attention to areas of conflict.

This ain't no Ninive!


And the word of the Lord came to Jonas the second time, saying: Arise, and go to Ninive the great city: and preach in it the preaching that I bid thee. And Jonas arose, and went to Ninive, according to the word of the Lord: now Ninive was a great city of three days' journey. And Jonas began to enter into the city one day' s journey: and he cried, and said: Yet forty days, and Ninive shall be destroyed. And the men of Ninive believed in God: and they proclaimed a fast, and put on sackcloth from the greatest to the least. And the word came to the king of Ninive; and he rose up out of his throne, and cast away his robe from him, and was clothed with sackcloth, and sat in ashes. And he caused it to be proclaimed and published in Ninive from the mouth of the king and of his princes, saying: Let neither men nor beasts, oxen nor sheep, taste any thing: let them not feed, nor drink water. And let men and beasts be covered with sackcloth, and cry to the Lord with all their strength, and let them turn every one from his evil way, and from the iniquity that is in their hands. Who can tell if God will turn, and forgive: and will turn away from his fierce anger, and we shall not perish? And God saw their works, that they were turned from their evil way: and God had mercy with regard to the evil which he had said that he would do to them, and he did it not.

So sit back and watch the impending fire storm.......